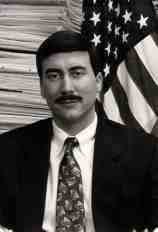 Politics is a good thing!” is the slogan of the next featured speaker of the Capital Tiger Bay Club, Dr. Larry Sabato. He is one of, if not the most quoted national elections experts and political scientists (University of Virginia) over the last ten years and has garnered a number of nicknames including the “Mark McGwire of political analysts” (Washington Post), “America’s favorite political scientist” (Fox News), and more recently the “Dr. Phil of American politics” (Washingtonian magazine). He is also the architect of “Sabato’s Crystal Ball,” a critically acclaimed elections analysis website predicting state and national results for mid-term and general elections (all political junkies will want to visit href=”http://www.centerforpolitics.org/crystalball”>www.centerforpolitics.org/crystalball or Google Sabato’s Crystal Ball)). He is also the author of twenty books and countless essays on the American political process, his most recent being Divided States of America: The Slash and Burn Politics of the 2004 Presidential Election. Sabato is the go-to-guy for objective analysis on all national, state specific congressional and senate, and state gubernatorial elections across all networks including Fox News, CBS, NBC, ABC, CNBC, and CNN, and is a frequent guest of the various talking head segments of these networks. If you recall, Dr. Sabato was our featured speaker at the October 2000 Tiger At Bay event and laid out the “realistic chance of an electoral college tie” for the Bush/Gore presidential election (quite prophetic eh?). Given the high stakes of the November 7, 2006 mid-term elections, and more specifically, which political party will control the U.S. House of Representatives and the U.S. Senate during the last two years of the Bush administration, the Tiger Bay crystal ball led us to bring back the good and insightful doctor-Larry Sabato. Please join us on Friday, November 3 at the Silver Slipper for this timely meeting.