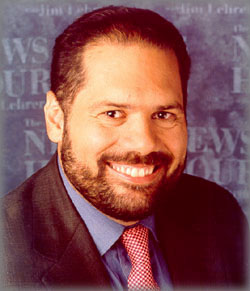 He is widely considered among the most talented and possesses one of the most distinctive voices working in broadcast journalism today. He is well known for his insightful and candid interviews and his skillful facilitation of studio discussions and debates with national and international newsmakers. He is Ray Suarez, Senior Correspondent and backup anchor for public television’s The NewsHour with Jim Lehrer. Prior to NewsHour, Mr. Suarez served as host for National Public Radio’s nationwide call-in news program Talk of the Nation. During his 1993-1999 tenure as host, Talk of the Nation’s listening audience nearly doubled and in 1994 won the prestigious Silver Baton Award for its groundbreaking coverage of South Africa’s first all-race elections and for NPR’s coverage of the 104th Congress. A veteran of nearly 25 years experience in the broadcast news business, he is also an author and his essays and critiques on various national and international news events frequent The New York Times, The Washington Post, The Chicago Tribune, and other national media. Please join us in welcoming this special guest to the Capital Tiger Bay Club on Wednesday, February 25, 2004 at the Silver Slipper.