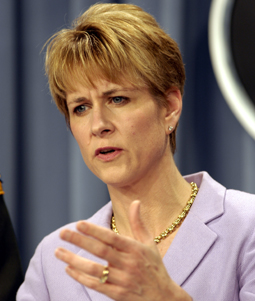 From the Pentagon to the private sector, Victoria (Torie) Clarke has been at the center of some of the most historic events in recent United States history. Serving most recently as Assistant Secretary of Defense for Public Affairs, she was at her desk in the Pentagon’s outer ring when the World Trade Center was attacked on 9/11; by the time the Pentagon was hit, Clarke had already moved to the Command Center where she was one of a small group of top aides to stay with and advise Defense Secretary Donald Rumsfeld throughout that tragic day. From those first moments on 9/11, to embedding correspondents with military units in Operation Iraqi Freedom-a program she conceived, designed, and ran-Clarke has played a leading role in shaping the public’s understanding of the war on terrorism. Her televised press briefings-as well as her appearances on programs ranging from 60 Minutes to Good Morning America to The Daily Show with Jon Stewart-have made her a leading public figure in our nation’s foreign affairs. As press secretary for President H.W. Bush’s 1992 re-election campaign, Clarke witnessed history from vantage points like Air Force One and was praised for her poise and professionalism during the campaign’s most difficult days. Given the breaking news of the last week, more specifically the capture of Saddam, she will bring unique and candid insight as to what impact this event might have on the war on terrorism, our international relations, and for the upcoming Presidential election in 2004. Please join us on Tuesday, January 6, 2004 at the CIVIC CENTER when Torie Clarke briefs the Capital Tiger Bay Club.