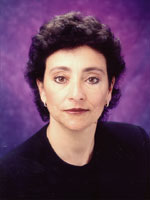 She recently prevailed in Florida’s Senate District 3 race with incumbent Democrat Senator Richard Mitchell — a race that arguably Florida’s nastiest in 2002. She has been characterized by her detractors as a political maverick, difficult to work with, and as “tough as battery acid.” Her supporters say she is one of straight talk and a fresh, independent voice for her constituents. While a self-proclaimed loyal Republican, she proved her independence by sending a 25 pound gift-wrapped box of cow manure to a lobbyist who was blocking one of her most important bills, an act that cost her a highly influential legislative committee chairmanship. She prides herself as being a “full-time legislator” and now she is the first Republican Senator to serve the Tallahassee area in almost 150 years. Come meet the newest member of the local Legislative Delegation, District 3 Senator Nancy Argenziano, at the next meeting of the Capital Tiger Bay Club on Tuesday, November 26 at the Silver Slipper. Please remember if you are coming to dish out some #%&!, Senator Argenziano has already proven she can take it and deliver it too!