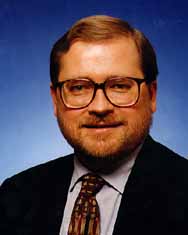 Grover Norquist, President of Americans for Tax Reform (ATR) and Tiger Bay’s next featured speaker, is beloved for his anti-tax crusade by the Republican Party’s conservative base and loathed by most Democrats. Mr. Norquist, who also serves on the Board of Directors for the National Rifle Association (NRA), was voted one of the fifty most powerful people in Washington, D.C. by GQ Magazine in 2007 and continues to advocate on the federal and state government levels for no new taxes. Most recently he has advocated the need to reduce the corporate tax rate and eliminate the estate tax. A frequent commentator on FOX, CNN, NPR and the seemingly growing number of political television and radio talk show circuits, his reputation as a provocative, straight-shooter for conservative fiscal policy is well-known. In the words of former Speaker of the House Newt Gingrich, Grover Norquist is ‘the person who I regard as the most innovative, creative, courageous and entrepreneurial leader of the anti-tax efforts and of conservative grassroots activism in America . . .He has truly made a difference and truly changes American history.’ His most recent book Leave Us Alone’Getting the Government’s Hands Off Our Money, Our Guns, Our Lives reveals his views on how the conservative movement can and will grow during the next 25 years. It should be interesting (to say the least) to hear his views on the Obama Administration, Congress, the proposed new ‘stimulus’ package, and given the outcomes of the most recent elections, the immediate and long-term future of the political and fiscal philosophy he espouses. Please join us on Thursday, February 19, 2009 at the Silver Slipper when the Capital Tiger Bay Club welcomes conservative maverick Grover Norquist to the dais for what is sure to be an informative and perhaps, even provocative program.