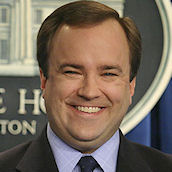 By the time the next featured speaker for the Capital Tiger Bay Club makes his remarks, the water coolers will have been drained with talk about his unfiltered comments and allegations on national television and radio networks, speculation about the impact of his book on President Bush’s legacy and possibly the upcoming Presidential election, and whether he should be denounced or admired for his revealing memoirs. Whatever your view, there is little doubt that Scott McClellan’s recently released book What Happened: Inside the Bush White House and Washington’s Culture of Deception has rocked the national political scene. Mr. McClellan, President Bush’s former White House Press Secretary and Senior Presidential Advisor (and next speaker for the Capital Tiger Bay Club) offers his personal insight and levels many allegations in “What Happened” about the 2004 election, the Iraq War, the Valerie Plame CIA leak, and others. In fact, it has caught the attention of current lawmakers on Capital Hill and speculation is high that McClellan could be called to testify in investigations related to the books assertions. A limited amount of books will be available for sale and personal signing by Mr. McClellan through the Friends of the Library at the event. Please join us for this special program scheduled for Thursday, June 26, 2008 at the CIVIC CENTER.