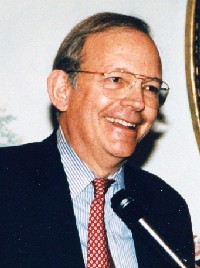 Anthony (Tony) Lake, Tiger Bay’s next featured speaker, was National Security Advisor during former President Bill Clinton’s first term. He is credited with developing the policy that led to the resolution of the Bosnian War. He also served in a range National Security posts during the Vietnam War under the Nixon Administration and accompanied National Security Advisor Henry Kissinger on his first secret meeting with North Vietnamese negotiators in Paris. In 1970, he had a falling out with Kissinger over the Nixon administration’s extension of the war in Cambodia. During the 1992 presidential campaign, he was one of candidate Clinton’s chief foreign policy advisors. Following Clinton’s 1996 reelection victory, Lake was nominated for CIA Director but his nomination was withdrawn due to strong opposition within Congress. Ironically, he is now serving as the foreign policy adviser for Barack Obama’s 2008 presidential campaign whose chief competitor is Democratic Presidential Candidate Hillary Rodham Clinton. Please join us for this special program when we welcome former National Security Advisor Tony Lake to the Capital Tiger Bay Club on Wednesday, September 26, 2007 at the Silver Slipper.