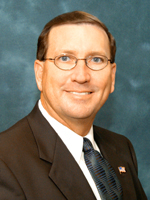 He has been anointed as the next President of the Florida Senate and is poised to take those reigns beginning in November 2006. He has been one of the Senate’s most popular members constantly recognizing the value in diversity from senators on both sides of the aisle. As a former House Member, he was a conservative firebrand but as a Senator he became a strong supporter of tax reform, including the elimination of millions in sales tax breaks for businesses. At its next meeting, the Capital Tiger Bay Club welcomes Florida Senator Ken Pruitt, a Republican from Port St. Lucie. Recently, Senator Pruitt has set off a furor with a party fundraising letter that accuses “liberal judges, the radical ACLU and the anti-God left” of assaulting the Pledge of Allegiance and the Boy Scouts of America. The letter cites the recent court rulings in California that reciting the words “under God” as part of the Pledge of Allegiance in public schools is unconstitutional and calls out liberals as using civil rights laws to the detriment of the Boy Scouts. The fiery letter has sent shock waves throughout the Senate and Legislature as he has pledged to “force liberals in the Florida Senate to take a stand one way or another.” Senator Pruitt has also observed a recent “coup in the Florida Senate” that has placed a gray cloud over who will assume the Senate leadership following his tenure-a situation that is already requiring his leadership and diplomacy. There are also the competing issues and priorities of the 2006 Legislative session, the swan song for Governor Jeb Bush. Dealing with liberals, minimizing the effects of the Senate coup, and trying to appease 39 power brokers-now that is what we call Multi-Tasking! Please join us at the Silver Slipper on Friday, February 24, 2006 when Senate President-designee Ken Pruitt shares his views and perspectives on these issues and many more the Legislature will face in 2006.