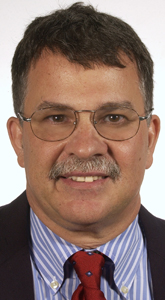 Well, he hasn’t actually limped into the spotlight now has he? You might say he has Zinged! his way into the Tallahassee and surrounding area. , the new Executive Editor for the Tallahassee Democrat and Tiger Bay’s next featured speaker, began his tenure in Tallahassee in August, 2005 when the Gannett Company, Inc. acquired the newspaper. Since that time, he has taken to the opinion page to express his dislike for the Zing! section but recently indicated that it will stay, with a few tweaks here and there. His initial views seem to reflect a desire to comment directly and seek the input (preferably by name and contact information) from citizens on many challenging and sensitive issues. His service in the newspaper industry began in 1979 and his career as a journalist, and more recently as an Executive Editor for papers in Asheville, North Carolina and Huntington, West Virginia, has garnered many awards. With the recent acquisition of the Democrat by Gannett and a new brass, there are sure to be changes in news coverage, focus, and philosophy. Please join the Capital Tiger Bay Club on Friday, January 27, 2006 in officially welcoming Mr. Gabordi to the community and have your Zings! (Urrrhh questions) ready.