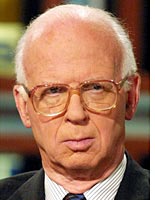 Considered “Washington’s most highly regarded columnist” for his “overall integrity, factual accuracy and insight” by both editorial-page editors and members of Congress, David Broder is certainly a diamond in the rough among today’s press. Mr. Broder, Tiger Bay’s next guest speaker, is a national political correspondent for the Washington Post, writes a twice-weekly column on American political life carried by more than 300 newspapers nationwide and is a regular commentator on CNN’s Inside Politics and on NBC’s Meet the Press and Washington Week in Review. He has covered every national campaign and convention since 1960. He has won numerous awards including the White Burkett Miller Presidential Award and the prestigious 4th Estate Award from the National Press Foundation in 1990; he is also the author or co-author of seven books and it has been said that he “has few challengers as the most influential political journalist in the country.” Please join us on Thursday, December 16 at the Silver Slipper, when the Capital Tiger Bay Club welcomes this special guest!