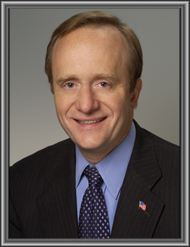 The stakes have never been higher and the political debate is heating up. Controversial television ads, the circumstances of Abu Ghraib in Iraq, the status of the economy, military service, and who has the better qualifications to lead are just a few of the issues driving the Presidential election. More specifically, how the media and campaigns frame these issues will influence greatly who our next President will be. Paul Begala, co-host of CNN’s political debate program, Crossfire and Tiger Bay’s next program speaker, will provide his insight “from the left” about the key issues in the upcoming election. Mr. Begala first entered the national political scene after his consulting firm, Carville and Begala, helped elect President Bill Clinton in 1992. He served as President Clinton’s primary spokesman and political advisor over the course of the Clinton presidency. Previously, Begala co-hosted with Oliver North MSNBC’s political talk show Equal Time, helped launch the George magazine serving as contributing editor and writing the Capital Hillbilly column, and co-authored with James Carville the current best-seller Buck Up, Suck Up and Come Back When You Foul Up. He undoubtedly will stir the pot and provide candid and unique insight to many of the controversial and emerging issues in the upcoming Presidential election. Come fire your own question at Paul Begala at the next meeting of the Capital Tiger Bay Club!