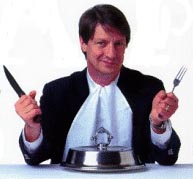 With more than a million words of acerbic journalism under his byline and more citations in The Penguin Dictionary of Humorous Quotations than any other living writer, P.J. O’Rourke has established himself as America’s premier political satirist. He is known as a hard-bitten, cigar-smoking conservative but, in fact, he bashes all political persuasions. His best-selling books include Parliament of Whores, Give War a Chance, Eat the Rich and The CEO of the Sofa. Both Time and The Wall Street Journal have called him “the funniest writer in America.” He covers current events with the skill and discipline of an investigative reporter but adds a unique spin that has earned him a reputation as a modern-day Will Rogers. Whether dealing with the inner workings of Washington bureaucracy, the shifting political and economic sands of the new world order or his own living room, P.J. proves himself to be a savvy guide to national and world affairs.