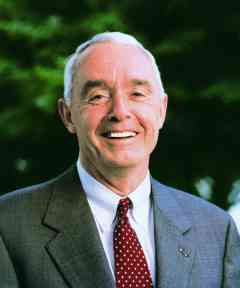 If you have been following the Iraq conflict and its aftermath, you have undoubtedly seen and heard from our next program speaker. General Barry McCaffrey has offered his insight and opinion, both complimentary and critical, of our country’s war strategy, diplomatic efforts, and nation building efforts to date. A candid commentator, General McCaffrey will offer his insights on all of these issues as well as what likely lays ahead, not only in Iraq, but abroad in the region. He serves as the lead national security and terrorism expert analyst for NBC News and serves as the Olin-Bradley Distinguished Professor of Security Studies at West Point. At retirement from active duty, he was the most highly decorated four-star general in the United States Army. He twice received the Distinguished Service Cross, the nation’s second highest medal for valor and was awarded two Silver Stars and three Purple Heart medals for wounds sustained in combat. General McCaffrey is also the nation’s former National Drug Policy Director and is a former assistant to General Colin Powell. He is also . . . . . you get the picture! We are truly honored to have such a decorated, articulate, and insightful guest for the Capital Tiger Bay Club.