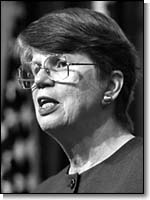 Now that the long awaited appointment of the Leon County Commission is over, the Democratic candidates for Governor are lining up faster than Nole fans at a Steve Spurrier visor-tossing contest. Speculation about the DREAM Team to unseat JEB is running wild. Enter contestant number one . . . Ms. Janet Reno. Fresh off a somewhat uneventful tenure as United States Attorney General (forget Waco, Monica, Elian, Chinese Fundraising, Whitewater, and lodging arrangements at the Lincoln Bedroom). Ms. Reno is coming to the Capital Tiger Bay Club to provide her perspective on leadership in the State of Florida. Never one to shy away from tough questions or decisive actions, she comes loaded for bear. Come join us on Friday, August 10 at the Silver Slipper as the Capital Tiger Bay holds Janet Reno hostage.