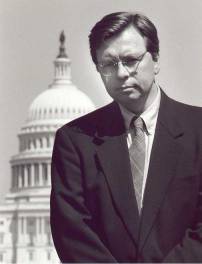 Charles Lewis is the founder and executive director of the Center for Public Integrity, a nonprofit, nonpartisan research organization in Washington that has issued roughly 60 investigative reports since 1990. He is the author, with the Center, of several studies about ethics and public service over the years, including The Buying of the President 2000 (Avon: January 2000), The Buying of the Congress (1998) and The Buying of the President (1996). Once dubbed a “watchdog in the corridors of power” by National Journal, Lewis and his organization broke the story of how the Clinton administration “rented out” the White House Lincoln Bedroom to campaign contributors, which won the Society of Professional Journalists “Public Service” award. Lewis, a former CBS News 60 Minutes producer, received a prestigious MacArthur Fellowship in 1998.