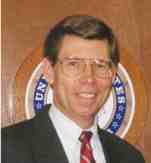 Who could forget Congressman Bill McCollum’s ferret-like attacks on President Bill Clinton during the Senate impeachment trial? The ten-term Congressman’s near obsession with Bad Boy Bill and his pubescent Monica gave him visibility on the national stage. Today, he hopes that notoriety and passion for the fight will get him elected to fill the shoes of U.S. Senator Connie Mack. At this point in the campaign, he’s playing the underdog to Republican rival Tom Gallagher and Democrat Bill Nelson. But a lot can happen between now and September, including a visit with the Capital Tiger Bay Club.