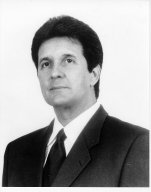 Since 1998, Simon Ferro has served as the U.S. Ambassador to the Republic of Panama, home of the Panama Canal, General Noriega and Shipwreck Island. His diplomatic skills were honed as a student at the Fredric Leven College of Law in Gainesville, the home of Steve Spurrier. Born in Cuba and raised in the United States, Ambassador Ferro has been a civic leader in South Florida for 20 years. He has served as Director of the Battered Women’s Clemency Funds and of United Family and Children’s Services of Dade County. During the late 80’s Ferro was the Chair of the Florida Democratic Party, where he presided over the final years of Democratic Party dominance in the Florida Legislature. A zoning attorney from Miami, Ferro is a survivor of Banana Republic politics in both South Florida and Central America.